Yxng Prodigy has officially unleashed his latest single, and he tapped in none other than Lelodoll for the assist. The freshly released “Bambelela” is also paired with a stunning new visual.

Artist and Rapper ‘Yxng Prodigy’ has released a brand-new track entitled Bambelela. Featuring Lelodoll, this track is certainly set to get you on your feet.  With its slow-paced throbbing beats, pulsating, hip-grinding sound, his husky voice fused with the song’s tempo sets the track apart. There is a pure connection between the artists and sound which makes you long for a big party.

Bambelela was born out of a collaboration between Yxng Prodigy and Lelodoll. This was nurtured through the popular #zimtotheworld, a platform where Zimbabweans from around the world network, share ideas/talents and business with one another.

The African music scene is evolving, and new songs are coming into the forefront, Amapiano is one of them. Amapiano is a genre coming out of South African influenced by the dance and party culture. All over Africa, its infectious sounds are taking over the sound waves and as southern Africans, it’s only natural for Yxng Prodigy to show us a refined version with this new track.

With a total of over 50k views on different digital platforms, the just-released video directed by JFX Visuals is making waves. The video opens with Lelodoll alongside Yxng Prodigy, in what appears to be a basketball court. While in another scene, Yxng Prodigy serving the catchy chorus.

With a flair for fusing Afro beats with a touch of his own unique style, Yxng Prodigy is a fast-rising star that shows his creative genius and allows his versatility and distinctive styles to take center stage. Originally from Nigeria & Zimbabwe, the South East London based artist speaks to his passion for music which started from an early age.

“Music was always a passion of mine since I was in my mother’s womb, when I look back at my life, I realize music was always the inevitable purpose for me” 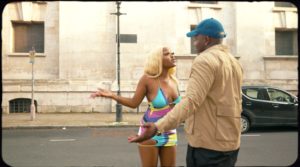 The rapper recorded his first song in 2018 with a group of friends to hone his skills before launching onto the scene as Yxng Prodigy. He went ahead to release his first official single La Madrina which garnered over 100k streams on Spotify with listeners from all over the world weeks after release. Taking influence from the legend Bob Marley, the talented rapper moved to collaborate with R&B/Soul artist Selena Jade for his ‘Hips Don’t Lie’ track.

You May Also Like:  Ada Ehi – Only You Jesus

Although he draws inspiration from a host of musicians from different eras and genres; his main inspiration is Bob Marley mainly because his music had a meaning/purpose and helped to bring people together.

Speaking on when we are to expect an EP, Yxng Prodigy says he and Lelodoll plan on working together a lot more based on the growing popularity of the amapiano sound.

“We want to introduce it to the global audience. So, an EP will be inevitable”

At the moment he has been listening to a lot of Amapiano /Afrobeat artists such as Focalistic, DJ Maphorisa, Samthing Soweto, Ruger, and Tems who he hopes to collaborate with.

With a huge influence on his career by Patrick of Hot Money Management, Yxng Prodigy can be sure to continuously please the ears with hot bangers back-to-back. This has so far revealed that he has much more to offer than he has boldly claimed openly. He has continued to impress everyone who comes across him and it is naturally hopeful for the world to want to experience more of what he has to offer.